Woo hoo!..I eeked out enough fabric to make the striped panel, although ideally it would have been the other way, three red, and four blue, having the blue on the outer edges as it is in the book plate.  The front blue panel is also not as full as I would have liked but at least I made it....with small scraps of blue left that I may make a ballgown bodice that I will trim with bits of blue (flowers? bows?).

Sewing the striped fabric was actually a lot more work that I thought it would be.  Marking it all out, then making sure when I sewed it that everything was pointing in the right direction.  The velvet has a nap and the red photo has a oriented pattern that had to all face in the same  direction.  I serged the pieces together than steam ironed the dickens out of the panel. While I was sewing the fabric got wanky despite my pinning it so it would not move and I got "stretch" on the red woven fabric.  I had to really hit the finished piece with a mister and hot iron...not ideal and not great for the velvet but it was the only thing that was going to flatten it all out.  The stripes are not really that squared or straight but you can't tell when it is all draped.

Here is the fabric spaghetti that became the panel: 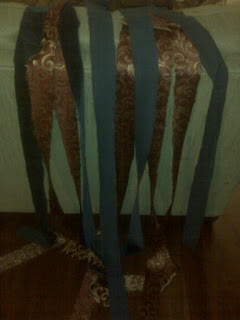 And the finished panel: 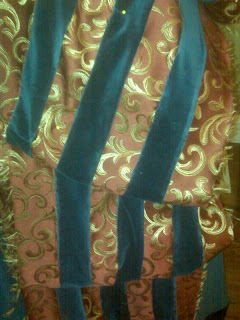