Fake Hair - The Beauty of It All!

For years I've worn wigs, and especially for Victorian costuming I've used hair pieces to create up-do braided styles.  I've saved shedding hair to make my own hair rats (no they don't have paws and a tail) but I've never used clip in extensions as they never see to be something that would work with my hair texture. I can find wavy ones, and I can find for the African Ancestry community but not for my hair...so I just don't use them...


The price of wigs for cosplay and extensions on eBay has come down tremendously. For less than 11 dollars I was able to get a set of wavy clip in extensions that matched my hair well.  These were crazy long, the longest I could find at the cheap end of the clip in hair (in the U.S. as I didn't have time to order from China).  After several YouTube tutorials watching high maintenance trophy wife types walk viewers through the steps I got the gist.  My natural hair was an odd mix of the bottom being flat ironed and the top remaining curly, which worked well with the accessory crown I had built for Ren Faire.  Since the hair was for Ren Faire on the Halloween festivity weekend I decided to play with some ridiculous filters.  Here is the MASSIVE HAIR test run: 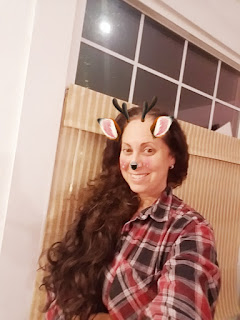 My family laughed at me because I sat around petting my new clip
on hair as though it was a new pet...lol. 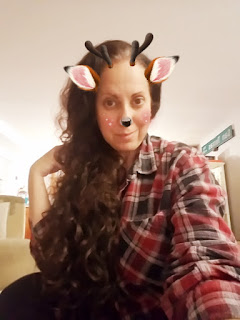 Here the top was more smoothed out, but for Ren Faire I actually left the top pretty curly which helped the crown stay on.

Email ThisBlogThis!Share to TwitterShare to FacebookShare to Pinterest
Labels: Hair

Tools to Invest In - Sometimes It's Good to Have Tools

This is a short post to share my love of tools.  Having the right tools is not only the right thing for men, it is great for creative women (or men) - ok...don't burn me for being sexist or stereotyping...I have a garage full of tools and build furniture as well as sew costumes....

One of the things I have found most necessary for making Ren Faire vests as well as other things, although you will not find any of these "00" grommets on any of my Victorian clothing, is a real grommet press.  The tool that weighs enough that you don't want to be dropping it on your toes or the floor .  The press sets grommets beautifully, a press is not cheap but I will NEVER go back to the hand method of setting grommets, especially for corset making.  If you sew your own corsets, make Ren Faire cloths, steampunk wearables, etc...buy a grommet press.

At this point I don't have a recommendation because mine was discontinued a long time ago.  It was not a professional one, and I know there are companies that make them for hobbyist use.

The other must haves are a rubber mallet and the leather punch for cutting the holes in fabric to put your grommets into.  Mine came from a big box craft store (punch), mallet from big box hardware store.  Don't forget to put something on your work surface when punching - I use an old plastic-ish cutting board from the big flat pack store. 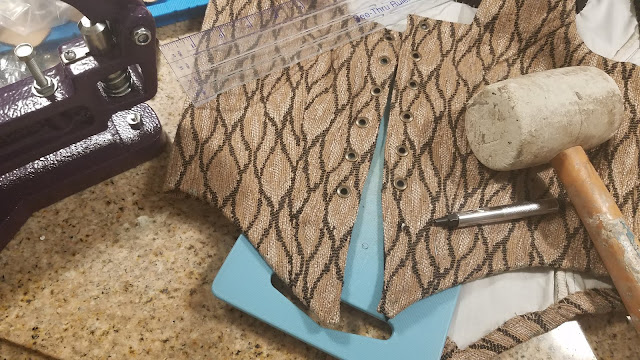 Queenie Wants a Crown - a tale of costuming wanderings.

So this post is about how to make a crown.  An earthy crown for what would eventually turn out to be an elf-queen like costume for Faire.

First I needed vines, I was going to run to the local craft big box store when I realized I had a grape vine in my back yard.  Mother nature was providing, however it was a little late in the season so many of the vines were already a little dry.  I was able to pluck enough of them to work...but I needed a frame: 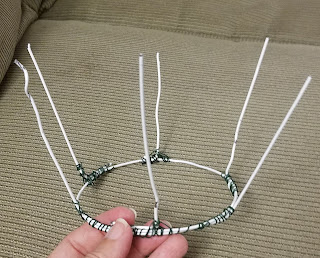 I always try to keep some wire hangers in the house.  They come in handy -- everything from digging miscellaneous stuff out of drains to creative endeavors.  I  quickly found a white one, and some floral wire I had in the craft box.  I bound a circle first then added on several "L" shaped pieces.  I tied them so they would angle out. 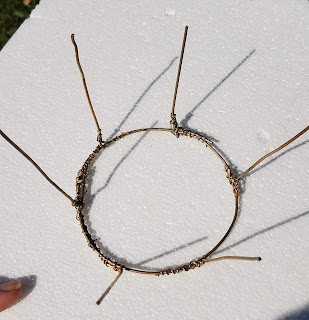 I then sprayed it with some spray paint I had in the garage.  It was a bronze/gold colour left over from another project. 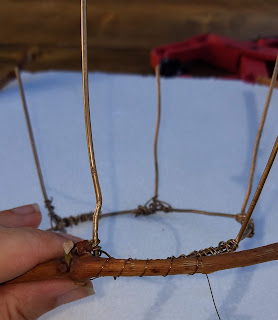 Before I started adding the grape vine I trimmed the vertical pieces so one in the front was taller, and I bought some bronze coloured wire to wrap with.  I cheaped out and the wire was really thin which meant I kept breaking it.  Next time, if there is a next time, I'll spend a little more and buy a slightly thicker wire.

I then took the vine which was still green and pliable on the inside and started bending it around the frame while wrapping it. 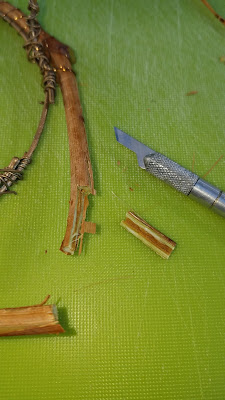 At first I was going to overlap the end pieces, which I cut with garden trimmers, but that would have been too bulky.  I realized I could notch the grapevine pretty easily with an xacto knife.  I eyeballed the cuts as this was a "woodsy" crown and perfection wasn't necessary.  Here is another picture: 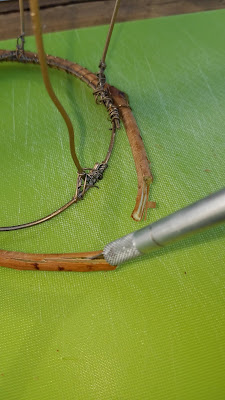 I then continued adding to the crown and winding the wire until I got a form that made me happy and seemed pretty sturdy.  No rules here.  I kind of created as I went with no firm plan at this point. 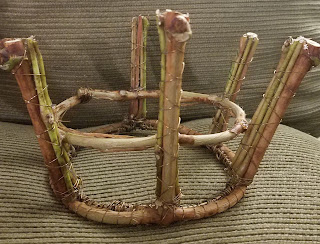 I tried really hard not to add any glue at all but ended up using the glue gun a little at the very tops where the thin pieces met to keep them all tightly together.  You couldn't see it once done because it was more inside.  Then I let it dry out.

At this point I took the crown to the craft store and tried to be inspired in regards to how to decorate it.  I wanted natural or natural-ish decorations.  I ordered some butterfly wings from Ebay....yes I do realize for some people that is gross but I had a vision.  In the end they showed up weeks late and crushed to a pulp....maybe karma for buying the things in the first place.

I found these wonderful quartz "beads" that would work...not a unique idea but they did turn out nicely.  They were a bear to find the right bead that would work without glue.  Lots of twisting wire (which should have been thicker) and praying everything would stay. 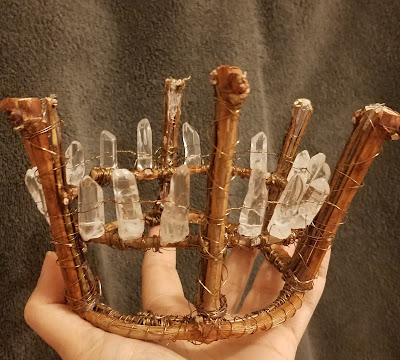 Loved my earthy crown, but the insidious thing is that because of this accessory I ended up with a whole new Ren Faire costume...love how that works sometimes.

NOTE:  I don't have a picture of this, but once I was done I realized I didn't know how to  attach it to my head.  I did get some thicker galvanized wire from the garage and made a "Y" shape that had three ends that wrapped around the base of the circle so it made a brace to attach hair pins to.  I will try to get a photo and post at some point.  It did work, that sucker wasn't moving but the whole thing hurt like heck when I didn't duck low enough to get in the car while wearing the crown...ack! 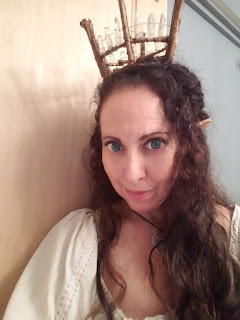 Here is a getting dressed photo with the crown on...sadly I didn't realize I pinned it on a little cock-eyed.