02/28/11
I've now got most of this complete.  I used a Simplicity pattern for the chemise, although I completely redid the sleeve because I didn't want this gathered poofy thing going on.  The petticoat was draped without a pattern.  I took a look at several blogs and "how to get dressed in the 18th century" blogs and figured I could do without a pattern, and it worked out fabulously.

I will admit that everything is built out of five yards of cotton that was used as a Thanksgiving tablecloth.  I figured eventually I'd use it to flatline something or make undergarments.  I managed to work around a stain left by the gravy boat being knocked over by an inebriated guest, and since I'm short there was plenty of yardage to work with.  The fabric had been washed,  spot treated so it no  longer smelled like turkey, and dried to get it to shrink a bit.

The following pic is a quick dry run.  An update on the stays:  I was able to make the stays smaller by overlapping the back and lacking it shut like that -- not correct but without doing that the stays were too big and didn't really cinch me in.  The shoulder straps are also way way too long, but for now I'm going to sew them together--I think rather than redo the whole darn thing....maybe....we'll see.   I have a great mask to wear which I will photograph later. 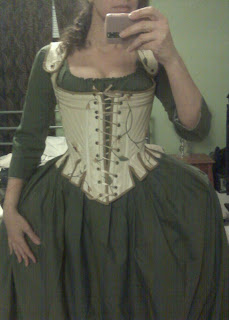 02/21/11  Pocket hoops are done, but not without a great deal of modification.  I used the pattern provided in the link below, however, there were no instructions regarding scaling.  As a person who is on the line of petite/average I found the pattern to be too long.  So in the end I cut off 8" of the width of the two pieces, and more than 6" on the length.

I've been told that the first time you wear panniers they seem unnatural and that bigger/wider is better, however, for my frame the original pattern sized seemed unreasonably large.  This will do for now.

I used the industrial zip ties again, this time finding a better deal in the plumbing department (25/36" heavy ties for $10).  These seemed to be a bit heavier than the ones in the electrical department and I doubled them up in each casing (used 12 total).  I think I'm ok with the finished product, and since I'm going for historical feel rather than accuracy they will do. 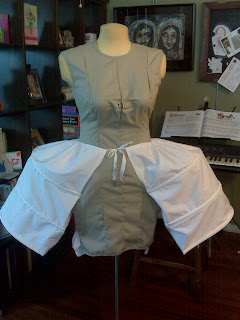 First Post:  I will be going to a Mardi Gras costumed/masked party soon and want to wear a historical costume rather than anything scary or too revealing.  I don't have time to sew a dress but I have the stays and can whip up a petticoat and chemise.  However, I need the pocket hoops.  I found a DIY site that I will try to replicate the hoops.  I will not use steel for this one but rather the industrial zip ties, but probably two in each channel.  Here is the link:

http://www.ferdalump.com/panniers.html
Posted by Rose at 7:47 PM No comments: