I already loath this project with a passion.  I have screwed up so many times I'm wondering if it is an omen.  Normally I don't have so many projects going on at once but this one didn't seem so hard.  I'm using a discontinued Simplicity pattern (love Ebay). 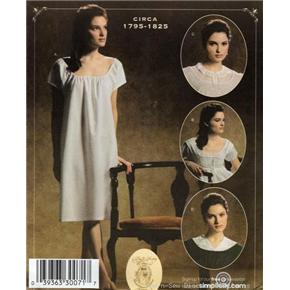 What I have discovered is that apparently I am a bit top heavy to get that really nice Regency look.  The goal is a refined Regency look not Regency strumpet.  I fit the canvas only to realize that even with the "D" bust gussets I am spilling out all over the place -- not good.  Good if I was trying to be Pamela Anderson but not good  if one is trying to emulate a lady like character from an early 19th century romance novel.  I am going to finish this project from hell but most likely I will need to sew long stays to get the look,  line, and support I want.  The short stays will have a number of modifications:
* As suggested in other blogs I am not sewing the arm straps to the front part of the stay.  I will use grommets and tighten and loosen as necessary.
* I will add boning to the front and sides, possibly back of stay to help hold the girls up.
* I will need to shorten the straps as I'm short in the upper body/torso and at the same time probably taper them in the front.
UPDATE:  01/09 -- I truly hate this project.  This should have been a no-brainer project.  I shortened the straps, added boning...all super easy.  Then realized that like the 18th century stays I should have made these at least a size smaller.  The dry run fittings seemed to go ok...it was just after I completely finished the things (minus the grommets) did I realize that this was just too big around the ribcage.  Stays are supposed to be drawn tightly or at least snug.  This was true to my regular measurements and instead of closing with at least an inch (should be more) space between the two ends, it fit end to end.  I could have scrapped this and started again but didn't.  Instead I cut the back in half, overlapped the center canvas and stitched it on the machine then started piecing everything together.  UGLY UGLY UGLY, but then again no one will see this and I will put together a better set in the future.
On the upside it took me 25 minutes or so to put together a chemise to use.  I opted for a sleeveless version so I could also use it for the 18th century stays and just be cooler under a costume while dancing.
Posted by Rose at 8:40 PM

Email ThisBlogThis!Share to TwitterShare to FacebookShare to Pinterest
Labels: Regency