I posted nine months ago - if you think about it, I could be on my way to the labor and delivery ward just about now...but no, that store is closed.

I have projects - sew many projects.  And for the first time in a long time I have the motivation to sew.  I will be sewing for myself and a few others which is exciting.  Ren Faire, and some Steampunk themed costumes are on the menu...as is rebuilding an entire costume closet because time and sitting in dark closets with lots of chocolate has not been kind.  Fluffy.  There was a time where it was easy to corset into a 23.5 inch waist...well...procreation, and now being "cough cough" over 50...it's more my thigh size than my waist size.

Over the last nine months I have been purging.  I had a stand at the annual GBAGC's Costume Bazaar which was a riot of treasures.  Never have I seen so many wondrous things.  Bargains galore!  However, I was there to sell, to build up some funding, kind of like "pin" money to move forward for this year's costumes.  I did well...but alas...I failed...I bought a sword...and boots...did I mention the sword.  A metal sword...a PIRATE sword...it's long and heavy and I ALWAYS wanted one!  Who am I to pass up a bargain pirate sword? 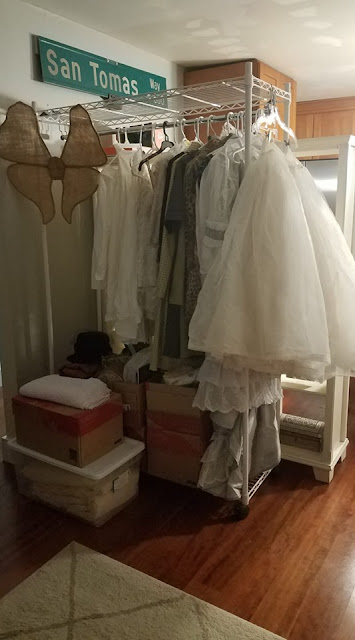 There was more to haul to the Bazaar by the time I was all said and done.  It felt good to clear some things out.  There were other bags that were donated and a trash pile as well.  Still can't barely walk in my costume/sewing/guest room, but the closet is a bit lighter and most of what was in the picture didn't come back home.  Marie Kondo would be proud.