Self - Education in Corset Making or "I think I always do things the hard way." 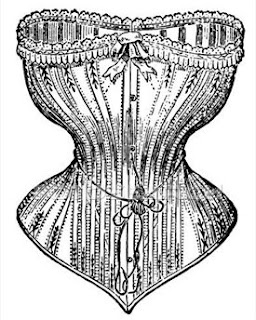 I want to look like the above corset, I have a good "squishability" factor, a rather ample bosom to ribcage ratio and apparently based on my attempts to do this "learning" project more junk in my trunk than I thought I did.  I know that you also have to allow the squish to go somewhere, it either has to go up or down.  I don't know much about corset making.  Years ago I had a spectacular corset made at Dark Garden, http://www.darkgarden.com. I've never owned a piece of clothing that has potentially gone up in value, when I had my corset custom made it was decidedly cheaper and the waist size was a 22".  Now they are more expensive and my lady bits have grown in girth.

I began by purchasing a really REALLY cheap Chinese corset.  For the cost of the busk I got the whole thing sent to my home, shipping included.  Got to love Ebay.  I bought a huge size thinking I could just adjust the curves down leaving the bust and hips.  That was a fiasco.  Obviously I need to take a pattern drafting class.  All was not lost because I decided to add gussets.  Who knows if this will work in the end but I don't want to start sewing all my upcoming costumes on my old corset which doesn't do what I want it to do.  I may try this then in the end by a corset pattern anyway, we'll see.

Here is the bought corset,you can see it is basically a large macaroni tube on me:

I started by marking the basic natural waist and where the under bust was while wearing a bra, I marked on the outside and transferred to the inside with water soluble sewing marker : 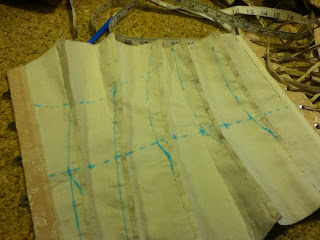 I then put my DG corset on manikin and padded the hips to a more correct size for the everyday me and not the tightly corseted me.  I deconstructed part of the corset and started pinning away...well that was just a big duhhh....when I tried it on.  I started undoing seams at the bust and hips.  Note to self:  when using sharp tiny scissors always remember to take off your shirt or you *might* cut holes in it...learn from me people...really... 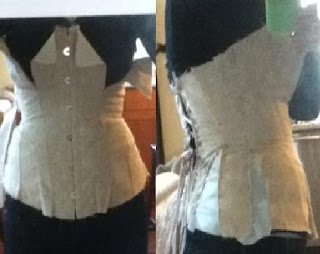 You can see that the corset is starting to take some shape.  Again, people...remove clothing before you start cutting seams...unless you are not partial to your garments -- fraycheck was my friend that day.

I started doing some fittings without a top, and decided my girls were a bit out of control.  I need to take a class, there is magical physics behind this somewhere.  I'm sure there is an algorithm that holds the secret of extreme corset curvature.  Note that this is all done without the boning at this point except at the back.  The corset came with cheapie boning (as can be expected for a corset at a silly low pricepoint).  I will add spiral boning eventually.  I made gussets from two layers of cotton and one of very thin silk -- but it was what I have in the house.  I am trying to make the best use of my stash. 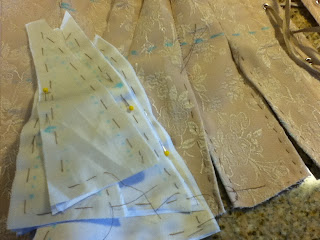 I took the time to base the edges and gussets to not have too much slippage.  Basted and watched Dr Who...I believe in using my time efficiently :-)

I started with the bust gussets but there was too much width from armpit to armpit so the girls were more widespread and relaxed than I wanted them to be: 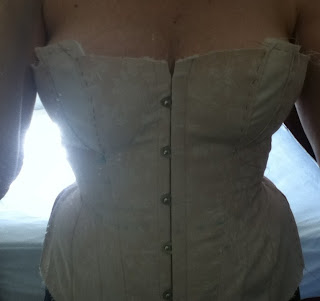 I then tightened up the seam on the sides, here you can see the pinning: 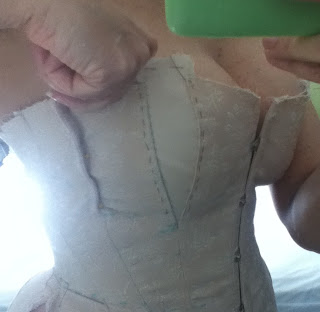 I am holding up the side (above) to mimic the boning that would eventually go in.  Unfortunately, I was off on my sewing, and apparently am not all that symmetrical, I flattened one of the ladies and had to go back and let some of the seam out: 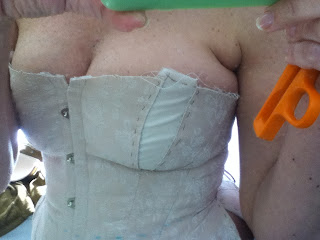 Now it is break-time I'm tired of looking at this.  I've put it on and taken it off today at least 157 times...ok, maybe not that many but it sure feels like it!! lol!
Posted by Rose at 8:17 PM No comments: 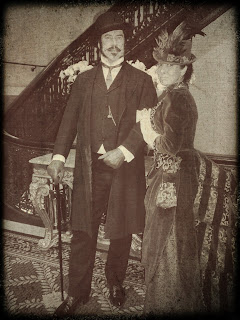 I haven't posted in a while because I got bogged down with life which impeded my sewing, then I stagnated...my fault entirely.  I'm trying to get motivated.  So many projects and so little time -- or in another way, tickets to the ball in hand and no dress...sigh.

Months ago I worked on the Book Cover Dress and literally at the last minute crafted a hat.  I called that project my "quick 'n dirty" project because it is pure theater, very little craftsmanship and lots of hot glue.  Now since I do costumes and do not reproduce clothing, I was happy with the outcome which at least on the outside was fab.  Here is the breakdown of the cost:

Total:  aprox. $5.50 - not bad when starting with a four dollar thrift store hat. 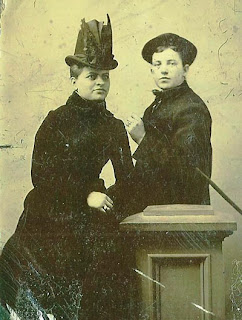 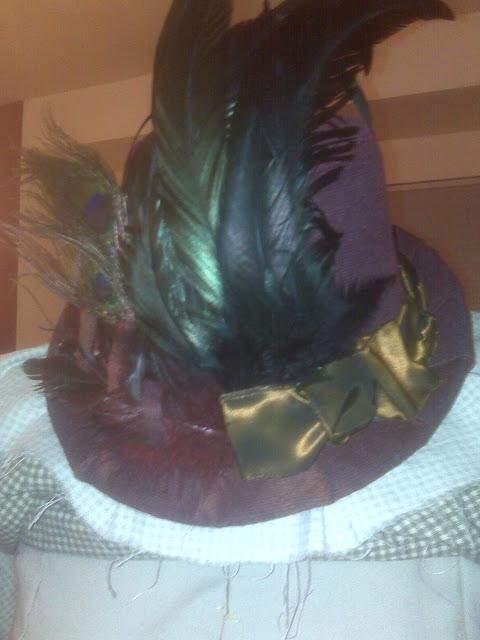 Although not perfect it worked with the outfit.  I'm not thrilled that the peacock feathers decided to lean opposite the other feathers.  I probably will fix that before the next time I wear the hat.  One day when I have time (hear hysterical laughter in the background) I may make a real hat.